The new Ukrainian government is faced with reopening an inquiry into evidence of an organized mass killing in Kiev that Poroshenko stonewalled. Ivan Katchanovski investigates. By Ivan Katchanovski Special to Consortium News Five years ago, the Maidan massacre in Kiev, Ukraine, of Feb. 18-20, 2014

Quelle: The Buried Maidan Massacre and Its Misrepresentation by the West

My article on #Maidan massacre in #Ukraine, its cover-up and stonewalled investigation, and its misrepresentation by @nytimes and US architectural company 3D model. #UkraineElection #UkraineElections2019 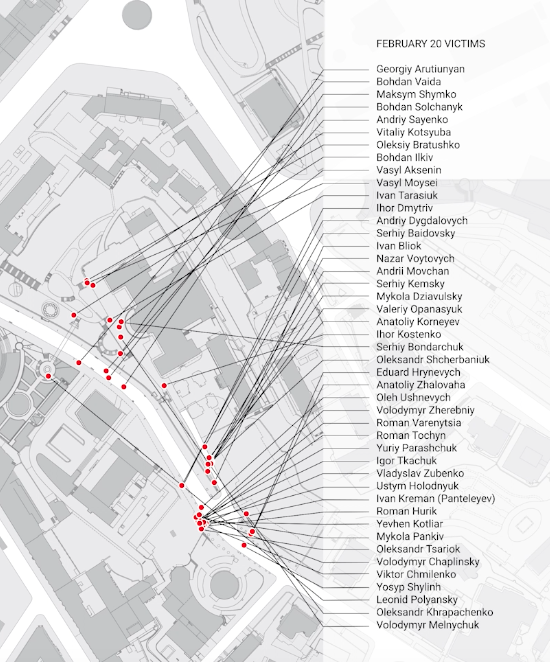 The full article you find here: KATCHANOVSKI Buried Maidan 20190422
Ivan Katchanovski teaches at the School of Political Studiesand the Department of Communication at the University ofOttawa. He held research and teaching positions at HarvardUniversity, the State University of New York at Potsdam, theUniversity of Toronto, and the Kluge Center at the Library of Congress. He received Ph.D. from the Schar School ofPolicy and Government at George Mason University. He is the author of “Cleft Countries: Regional Political Divisions and Cultures in Post-Soviet Ukraine and Moldova.”

Gefällt mir Wird geladen...
Juni 2017
1
The “Snipers’ Massacre
” on the Maidan in Ukraine
1
(With Revised and Updated Online Video Appendix (2017)) Ivan Katchanovski, Ph.D. School of Political Studies University of Ottawa Ottawa, ON K1N 6N5, Canada ikatchan@uottawa.ca Paper prepared for presentation at the Annual Meeting of American Political Science Association in San Francisco, September 3-6, 2015
“Il est défendu de tuer; tout meurtrier est puni, à moins qu’il n’ait tué en grande compagnie, et au son des trompettes; c’est la règle.”[It is forbidden to kill; therefore all murderers are
punished unless they kill in large numbers and to the sound of trumpets; it is the rule].
1
(Voltaire).
The 55 minute long online video appendix with added English-language subtitles is produced from brief synchronized segments of on-site reports by American, Belgian, Belarusian, British, Finish, French, Dutch, German, Polish, Russian, Spanish, and Ukrainian TV correspondents and social media videos by various Maidan protesters who filmed the Maidan massacre on February 20, 2014. These videos are cited in the following papers for which this video appendix is  produced:
„The Maidan Massacre in Ukraine: Revelations from Trials and Government Investigations,“ presented at the 22th Annual World Convention of the Association for the Study of Nationalities, Harriman Institute, Columbia University, New York, May 4-6, 2017, and „The “Snipers’ Massacre” on the Maidan in Ukraine,” presented at the Annual Meeting of the
American Political Science Association in San Francisco, September 3-6, 2015. The papers are available at: https://www.academia.edu/33689002/The_Maidan_Massacre_in_Ukraine_Revelations_from_Trials_and_Government_Investigations https://papers.ssrn.com/sol3/papers.cfm?abstract_id=2658245 https://www.academia.edu/8776021/The_Snipers_Massacre_on_the_Maidan_in_Ukraine https://www.researchgate.net/publication/266855828_The_Snipers%27_Massacre_on_the_Maidan_in_Ukraine

The “Snipers’ Massacre” on the Maidan in Ukraine
This academic investigation concludes that the massacre was a false flag operation, which was rationally planned and carried out with a goal of the overthrow of the government and seizure of power. It found various evidence of the involvement of an alliance of the far right organizations, specifically the Right Sector and Svoboda, and oligarchic parties, such as Fatherland. Concealed shooters and spotters were located in at least 20 Maidan-controlled buildings or areas. The various evidence that the protesters were killed from these locations include some 70 testimonies, primarily by Maidan protesters, several videos of “snipers” targeting protesters from these buildings, comparisons of positions of the specific protesters at the time of their killing and their entry wounds, and bullet impact signs. The study uncovered
various videos and photos of armed Maidan “snipers” and spotters in many of these buildings. The paper presents implications of these findings for understanding the nature of the change of the government in Ukraine, the civil war in Donbas, Russian military intervention in Crimea and Donbas, and an international conflict between the West and Russia over Ukraine. Original PDF below
Quelle: Ivan Katchanovski, Ph.D. School of Political Studies University of Ottawa

[RT]
Kiev ignored independent assessment of snipers at Maidan – Lavrov
Authorities in Kiev have routinely ignored evidence in the case of sniper shootings on the Maidan, while suggestions of probes into the matter never came from official channels, Russian FM Lavrov said. http://rt.com/news/lavrov-cis-ukraine-337/