The true story of Soleimani’s assassination goes much deeper than what has been reported, involving Saudi Arabia and China.
— Weiterlesen themindunleashed.com/2020/01/assassination-of-soleimani.html

Constructivism criticism from one’s own supporters is oftentimes the most effective way for a country, project, or global vision to improve its shortcomings before they become unmanageable, and it’s with this in mind that such an approach must be urgently undertaken when it comes to China’s Silk Road. China’s Belt […]

Why there won’t be a revolution in Iran

Iranian President Hassan Rouhani did the right thing going on television and at least acknowledging popular anger over hard economic times. Inflation is high at 12% but down from 40% at the start of Rouhani’s first term. And the recent increase in fuel and food prices by up to 40% has hardly helped.

That was part of Team Rouhani’s 2018 budget, which cuts subsidies for the poor – a key feature of the previous Ahmadinejad administration.

Then there is youth unemployment, which hovers around the 30% mark. Similar figures recently came out of Spain, a member of the European Union. Of course, that explains why the bulk of the protesters are under 25 from working class backgrounds.

What Rouhani should have explained to Iranians in detail is the direct consequences of hard economic times and United States sanctions, which are affecting the country.

These were coupled with financial threats against western firms now back in business, or at least contemplating opening up operations, in Iran.

Rouhani did promise after signing the Joint Comprehensive Plan of Action, also known as the Iran nuclear deal, in the Austrian capital of Vienna in 2015 that it would lead to more jobs and stimulate the economy.

While that has not been the case, legitimate protests singling out economic problems have never gone away. In fact, they have been part of the Iranian picture for decades.

If we consider the Islamic Republic experiment, a sort of “theocracy with democratic characteristics,” the most striking element is how deeply rooted it is in the country.

I learned this during my many trips to Iran and it has a great deal to do with the basij, or voluntary militias. They have permeated all aspects of social life from unions to student bodies and civil servant groups.

In this respect, there is a strong similarity to China, where the Communist Party is embedded in the very fabric of society.

Talking to young people in places such as Kashan or Mashhad showed me how solid the popular base was behind the Islamic Republic experiment. It was certainly more thought-provoking than listening to ayatollahs in Qom.

Still, what is happening now in Iran is that legitimate protests related to economic hardships have been hijacked by the usual suspects in a move to influence the minority. After all, Rouhani’s administration is comparatively liberal compared to the populist Ahmadinejad government.

So, what we have is a concerted attempt to turn legitimate protests into a “revolutionary” movement with the aim of bringing about a regime change. In all practical purposes, this would be civil war.

Well, it will simply not work. Anyone familiar with Iran knows the country’s civil society is far too sophisticated to fall into such a crude and obvious trap.

For a clear take on the foreign influence angle, you should watch Professor Mohammad Marandi, of the University of Tehran, an academic of absolute integrity, arguing with a former BBC employee on the Qatari-owned Al Jazeera television network.

Indeed, what is certain is that foreign elements are acting as provocateurs to influence the protests. This “whole world is watching” tone is meant to intimidate Tehran’s response.

Yet there has to be a crackdown against the violence as Rouhani strongly hinted. Imagine the police response if the level of violence seen on Iranian streets was happening in France or Germany?

Regime change is unlikely but what is in play is setting the scene for a further renewal of economic sanctions against Iran. Possibly, in this case by the EU. Hopefully, it will not fall into this trap.

Anyway, Tehran is already gearing up to increase business across Eurasia through China’s new Silk Roads, the Belt and Road Initiative, and the Eurasia Economic Union.

In the end, it is up to Team Rouhani to be creative in alleviating the burden on the economic front.

Tomorrow the two-day Belt and Road Forum for International Cooperation is starting in Beijing. Representatives from more than a hundred nations will converge in Beijing and most of them are from the 120-nation Non-Aligned Movement (NAM).

„Of course we will have Vladimir Putin, representing the Russia-China strategic partnership (BRICS, SCO) that spans everything from energy to infrastructure projects (including the future Trans-Siberian high-speed rail). But, crucially, we will also have Pakistani Prime Minister Nawaz Sharif and Turkish president Recep Tayyip Erdoğan, leaders of two key hubs of OBOR/BRI.

Most of the West still needs a weatherman to see which way the wind is blowing. And a lot of Western media revel in dismissing OBOR/BRI as a conspiracy, a “scheme”, or a Chinese attempt to “encircle” Eurasia. Only one G7 leader will be in Beijing; Italian Prime Minister Paolo Gentiloni, who is very keen to investigate symbiotic links between Italy’s Industry 4.0 program and China’s Made in China 2025 manufacturing initiative.

Angela Merkel might have turned down her invitation but it doesn’t really matter as German industrialists are all for OBOR/BRI.“ (1)

In an article „China widens its Silk Road to the world“ Escobar specifies the geopolitical/geoeconomic implications of this connectivity project — spanning 65 nations, 60% of the world’s population and a third of global economic output.

Escobar is one of the few world famous journalists covering the New Silk Roads since they were first announced in 2013. (2)

I entrust to you the four-part series of articles written by Federico PIERACCINI about Geopolitics, Globalization and World Order.

„In this series of four articles I intend to lay a very detailed but easily understandable foundation for describing the mechanisms that drive great powers. To succeed, one must analyze the geopolitical theories that over more than a century have contributed to shaping the relationship between Washington and other world powers. Secondly, it is important to expound on how Washington’s main geopolitical opponents (China, Russia and Iran) have over the years been arranging a way to put a stop to the intrusive and overbearing actions of Washington. Finally, it is important to take note of the possibly significant changes in American foreign policy doctrine that have been occurring over the last twenty years, especially how the new Trump administration intends to change course by redefining priorities and objectives.“ Pieraccini, 19.12.2016

„The preceding three parts of this series analyzed the mechanisms that drive great powers. The most in-depth understanding of the issues concerned the determination of the objectives and logic that accompany the expansion of an empire. Geopolitical theories, the concrete application of foreign-policy doctrines, and concrete actions that the United States employed to aspire to global dominance were examined. Finally, the last bit of analysis focused particularly on how Iran, China and Russia have adopted over the years a variety of cultural, economic and military moves to repel the continual assault on their sovereignty by the West. Finally, specific attention was given to the American drive for global hegemony and how this has actually accelerated the end of the ‚unipolar moment‘, impelling the emergence of a multipolar world order.

In this fourth and final analysis I will focus on a possible strategic shift in the approach to foreign policy from Washington. The most likely hypothesis suggests that Trump intends to attempt to prevent the ongoing integration between Russia, China and Iran.“, Pieraccini, 15.01.2017

I’ve compiled the articles in one pdf-file (attached, 22 p) – separate they are available via following URLs:

II. The United States and The Race for Global Hegemony, 23.12.2016
www.strategic-culture.org/news/2016/12/23/united-states-and-race-global-hegemony.html

III. How a United Iran, Russia and China are Changing The World – For the Better, 01.01.2017
www.strategic-culture.org/news/2017/01/01/how-united-iran-russia-china-changing-world-better.html

The two previous articles have focused on the various geopolitical theories, their translations into modern concepts, and practical actions that the United States has taken in recent decades to aspire to global dominance. This segment will describe how Iran, China and Russia have over the years adopted a variety of economic and military actions to repel the continual assault on their sovereignty by the West; in particular, how the American drive for global hegemony has actually accelerated the end of the ‚unipolar moment‘ thanks to the emergence of a multipolar world.

Quelle: How a United Iran, Russia and China are Changing The World – For the Better

Quelle: The ultimate 21st century choice; OBOR or war | The Vineyard of the Saker

Quelle: Hybrid Wars 6. Trick To Containing China (IX)Andrew Korybko is the American political commentator currently working for the Sputnik agency. He is the post-graduate of the MGIMO University and author of the monograph “Hybrid Wars: The Indirect Adaptive Approach To Regime Change” (2015). This text will be included into his forthcoming book on the theory of Hybrid Warfare.

Hybrid Wars 4. In the Greater Heartland

The aftermath of the failed US-directed and Gulen-inspired coup attempt is already making itself clear, with Prime Minister Yildirim stating that Turkey might reinstate the death penalty to deal with the plotters. This statement is just as symbolic as it is substantial, since not only does it disprove allegations that Erdogan “planned this” himself for some Machiavellian purpose, but it also indicates that Turkey has decided to shun the West. The EU is strictly against the death penalty and would immediately halt the decades-long drawn-out accession negotiations with Turkey as a result.

Erdogan correctly calculated that the EU wants nothing to do with his country and that Turkey is unable to milk extra benefits from the bloc after the Brexit referendum, so he recalibrated his state’s foreign policy to align with the multipolar world instead. This saw the recent news of Turkey belatedly declaring Al Nusra a terrorist organization and opening up secret reconciliation talks with Syria, despite still repeating the “face saving” refrain of “Assad must go”. Furthermore, Turkey is part of Russia’s nascent coalition of regional powers opposed to the US’ daring attempt to militantly carve out the “second geopolitical Israel” of “Kurdistan”. Not only that, but Turkey are Russia are also back on track for reimplementing the Balkan Stream megaproject, which when paired with China’s complementary Balkan Silk Road high-speed rail project from Budapest to Piraeus, is perhaps the most ambitious multipolar outreach to Europe that has ever been attempted. (…) 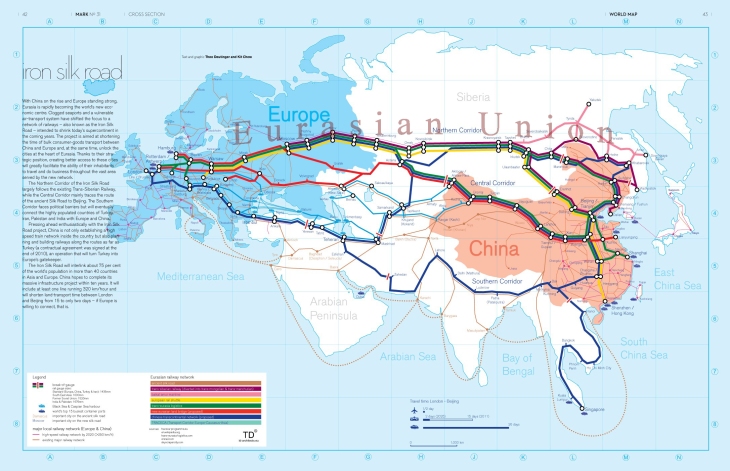