On August 15 we explained why the color revolution in Belarus would fail. Belarus‘ President Alexander Lukashenko had offered President Vladimir Putin of Russia to finally implement the long delayed Union State that will unite Belarus with Russia. In exchange he wanted full Russian backing for shutting down the U.S. led color revolution against him. Putin accepted the deal. In consequence:
Lukashenko, and his police, will not hang from a pole. Russia will take care of the problem and the Union State will finally be established.
That does not mean that the color revolution attempt is over. The U.S. and its lackey Poland will not just pack up and leave. But with the full backing from Russia assured, Lukashenko can take the necessary steps to end the riots.
And that is what he did. Lukashenko continued to allow demonstrations but when on Sunday the demonstrators were directed to storm the presidential palace they saw a theatrical but strong response: (…)

Putin’s Call For A New System & The 1944 Battle Of Bretton Woods: Lessons For Victory Day

Authored by Matthew Ehret via The Saker blog,

As today’s world teeters on the brink of a financial collapse greater than anything the world experienced in either 1923 Weimar or the 1929 Great depression, a serious discussion has been initiated by leaders of Russia and China regarding the terms of the new system which must inevitably replace the currently dying neo-liberal order. Most recently, Vladimir Putin re-initiated his January 16, 2020 call for a new emergency economic conference to deal with the looming disaster based upon a live session with representatives of the five nuclear powers of the UN Security Council.

This new system as we have seen promoted by the likes of the Bank of England and leading technocrats over the past year, is based upon an anti-Nation State, unipolar system which typically goes by the term “Green New Deal”. In other words, this is a system ruled by a technocratic elite managing the reduction of world population through the monetization of carbon reduction practices under a Global Government.

No matter how you look at it, a new system will be created out of the ashes of the currently dying world order. The question is only: Will it benefit the oligarchy or the people?

In order to inform the necessary decision making going into this emergency conference, it is useful to revisit the last such emergency conference that defined the terms of a world economic architecture in July 1944 so that similar mistakes that were then made by anti-imperialist forces are not made once more. (…)

What’s certain is that the Empire won’t go quietly into the night…
— Weiterlesen www.zerohedge.com/geopolitical/escobar-exposes-americas-existential-battle-stop-eurasian-integration

[this analysis was written for the Unz Review]

In his recent article “The Road to Damascus: How the Syria War Was Won” Pepe Escobar summarized the outcome of the war in Syria in the following way:

“It’s a quadruple win. The U.S. performs a face saving withdrawal, which Trump can sell as avoiding a conflict with NATO ally Turkey. Turkey has the guarantee – by the Russians – that the Syrian Army will be in control of the Turkish-Syrian border. Russia prevents a war escalation and keeps the Russia-Iran-Turkey peace process alive. And Syria will eventually regain control of the entire northeast.”

This otherwise excellent summary overlooks two out of three members of the “Axis of Kindness”, including Israel and the KSA.  Of course, later in his analysis Pepe does address these actors, and also includes Kuwait. Furthermore, a thorough discussion of what took place would have to also include China, Hezbollah, Yemen and the EU (well, the ones that matter, the UK and France.  The rest are just voiceless colonies of the USA).

Most of the analyses of what just took place focused on the “what”.  I will try to look into the “why” and the “how” of what just happened in Syria.  Still,  I don’t propose to make such a detailed analysis, but I do want to re-classify the actors in a somewhat different way: by their relative strength.

Of course, and just like any other taxonomy, this one is necessarily somewhat subjective and others might use different criteria or categories.  Now let’s look at what I believe is the key to the control of the entire region: the ability to place “boots on the ground” or the lack of such an ability: (…)

Bonanza media investigative team of independent journalists take exclusive interviews with one of the suspects of downing the MH17, Malaysian prime minister; colonel that collected black boxes and much more. Eye opening testimonies from witnesses and irrefutable evidence from experts. Exclusive footage shot in Malaysia, The Netherlands and at the crash area in Ukraine.
+++++
on Twitter found:

‚#MH17– Call for Justice‘ directed by Yana Yerlashova. Stats going through the roof after 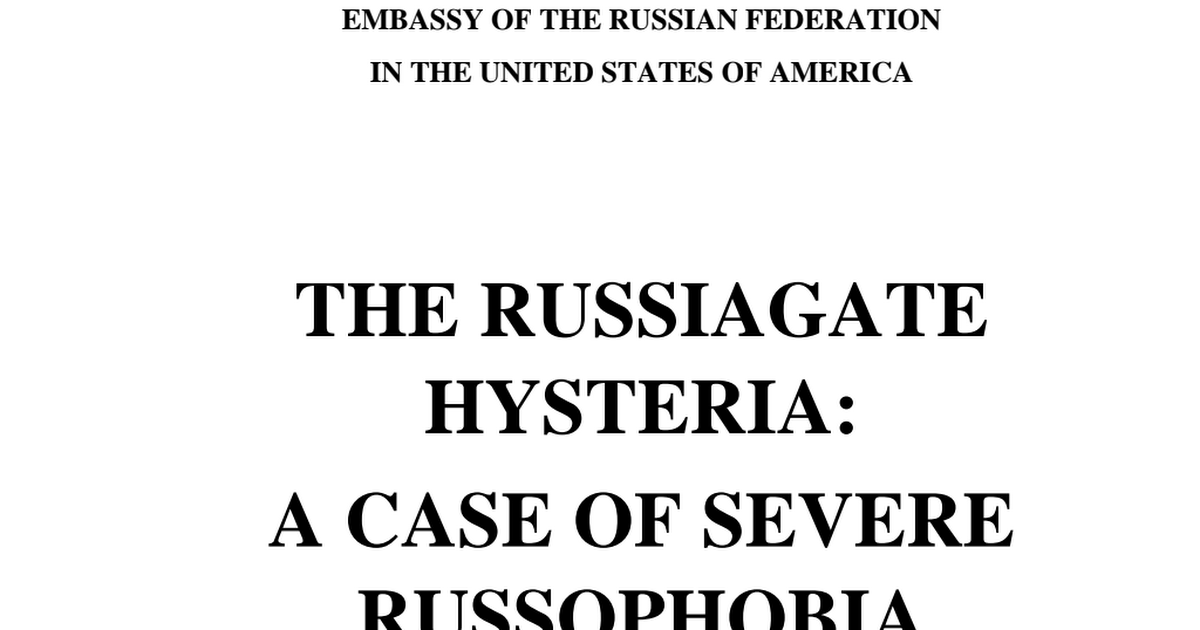 Quelle: THE RUSSIAGATE HYSTERIA: A CASE OF SEVERE RUSSOPHOBIA.pdf

The full Text: THE RUSSIAGATE HYSTERIA_ A CASE OF SEVERE RUSSOPHOBIA

(An airplane with the Russian flag was seen at Simon Bolivar International Airport in Caracas, Venezuela, March 24, 2019.) The Foreign Ministry spokesperson Maria Zakharova acknowledged in Moscow on Tuesday that Russian “specialists” are indeed in Venezuela within the ambit of a 2001 military-technical cooperation agreement with Caracas. Zakharova underscored that Russia’s bilateral military cooperation … Continue reading „Russia throws down the gauntlet to US on Venezuela“

Quelle: Russia throws down the gauntlet to US on Venezuela – Indian Punchline

Federico PIERACCINI: Iran, Russia, Syria are the only ones who do not need to bluff, because they occupy the best position – the commanding heights. They view Trump’s decisions and his allies with distrust.

Quelle: Trump Pulls Troops Out of Syria in Desperate Attempt to Save His Presidency, Causing Geopolitical Earthquake

Forces are aligning against Saudi Arabia’s Crown Prince, lead by elements within the CIA and strong players in the mainstream media. But what is really behind this deterioration in relationship, and what are its implications?